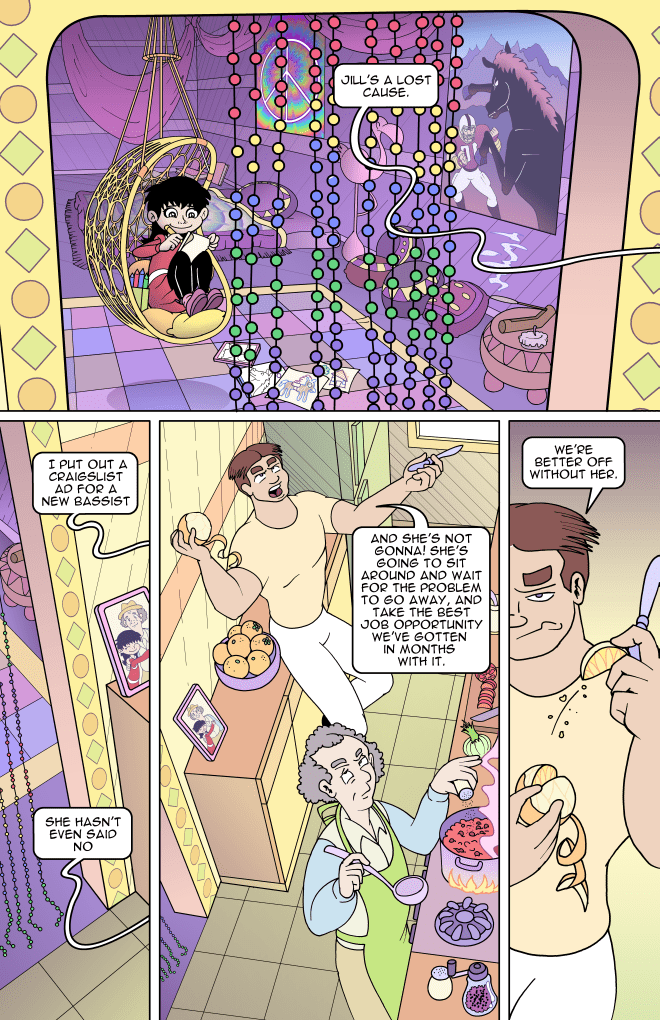 There’s dissension afoot in the Satanic 3 And Knuckles house. Which is Starflower’s house. How nice of him to invite Riley over. It’s a very nice house, and gets Starflower’s “aging hippie” character over well enough.

The girl drawing horses is (SHOCKING REVEAL) Mary Farrier, the Horse Champion who’s allied with the Hares, and was the 8-year-old girl that escorted Jill home, a mystery that oddly enough no one ever thought to ask about. The first thing I wrote for LotH was a scene that didn’t make it into the comic where Mary and Eion scoped out Jill secretly. Mary’s name is a pun (Mare-y), and a Farrier is someone who shoes horses. Having a punny name herself, she noticed the punniness of the name “Jill Leverett” and was the one who actually picked Jill to be the new Rabbit Champion. She’s also the one who made the Horsestone that can be used to teleport that Amaya had (moving people around being, of course, something horses are known for being able to do!) Mary is also how Starflower (her dad) seems to be aware of the shenanigans in the tower, which the lore posts hinted at a few times but never came up in the comic proper. Sadly, since LotH went off the rails, she never appears again after this cameo, despite actually being a massively important character behind the scenes.

It occurs to me as I’m posting that this page has a smooth continuous “camera movement”, zomming out of Mary and zooming into Riley. Someone better at art than me could probably say something really insightful about this. A writer type might also notice that Riley is talking about cutting Jill out of the band while cutting a slice out of an orange. Was that intentional on my part? It…might have been? I don’t really remember. I think it was, actually, but this orange metaphor is just here for the sake of being here, there’s no oranges anywhere when Jill next meets Riley to pay off the symbolism here.

The footballer vs horse painting is a real painting, that was famously purchased by Homestuck artist Andrew Hussie. I can’t believe I never had a football-themed villain to match the painting. Chalk it up to inexperience.