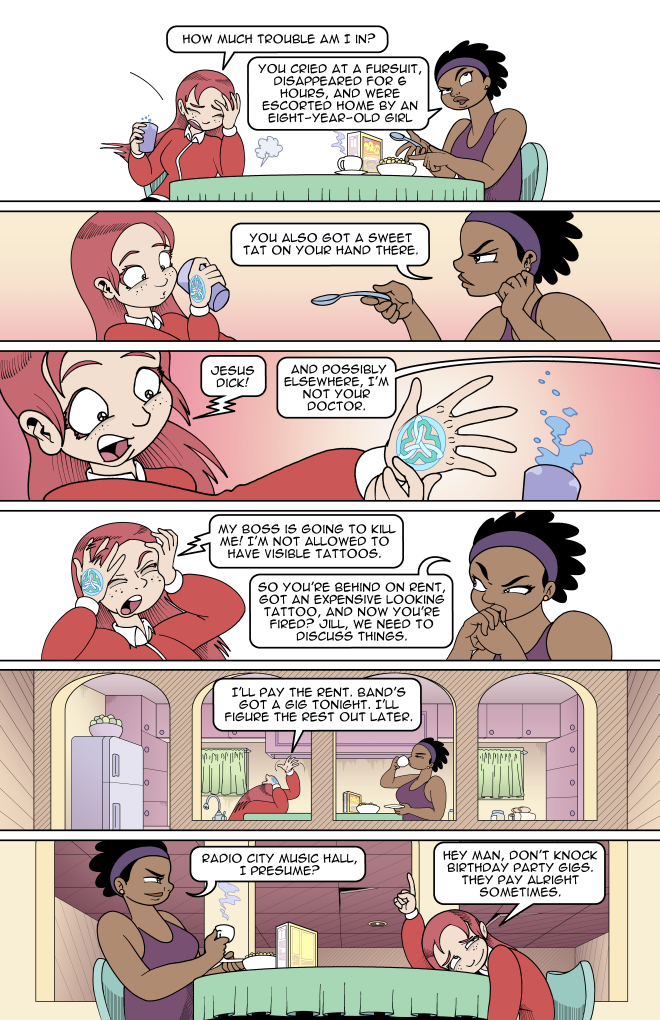 Jill’s expression in panel 4 there was my social media avatar for a long time. It’s a good rantsona icon if you’re into that kind of thing, but I eventually switched it out for the Naomi Franquiz “Hare with Saffron and Sage” icon I use now.

One interesting thing I learned from this page is that you can slip in a lot of foreshadowing if it comes off as a wacky joke. Who’s this eight year old girl who escorted Jill home? As far as I could tell, no one ever thought to even speculate over it, and it’s never explained in the comic. Which is a bit sad, because it was Mary Farrier, the Horse Champion, who actually does appear on-panel later and was intended to be a major player behind the scenes. A farrier is a person who makes horseshoes, and Mary because, y’know, mare-y. A jill is a female hare, a molly is a female cat, a mare is a female horse, and Ms. Peggy is kind of obvious. All the champions have names like that….except Amaya, who’s ignoring the convention and just kind of doing her own thing nameways. Sort of like how my other comic has a main four of Saffron, Sage, Coriander, and Liri. Liri’s supposed to be a bit of an “odd man out”, but I have no idea why Amaya doesn’t want to play along with the naming scheme. Maybe she’s just a stick in the mud.

Jill’s tattoo is a triquetra, which is a celtic symbol that’s used a lot in the Book of Kells, but modern readers might know is as the symbol on Thor’s hammer in the MCU movies. It’s just an “Irish” thing here, and it was a pain in the ass for Carlos to have to draw all the time, and one of the visual elements of Jill’s design that kept getting forgotten.

The lore post for this page is long and boring and is more shit about the war, but one of the comments on the page likes it. Another likes that we’re learning more of Jill’s personal life, so I guess I wasn’t the only one who thought I’d skipped the setup.