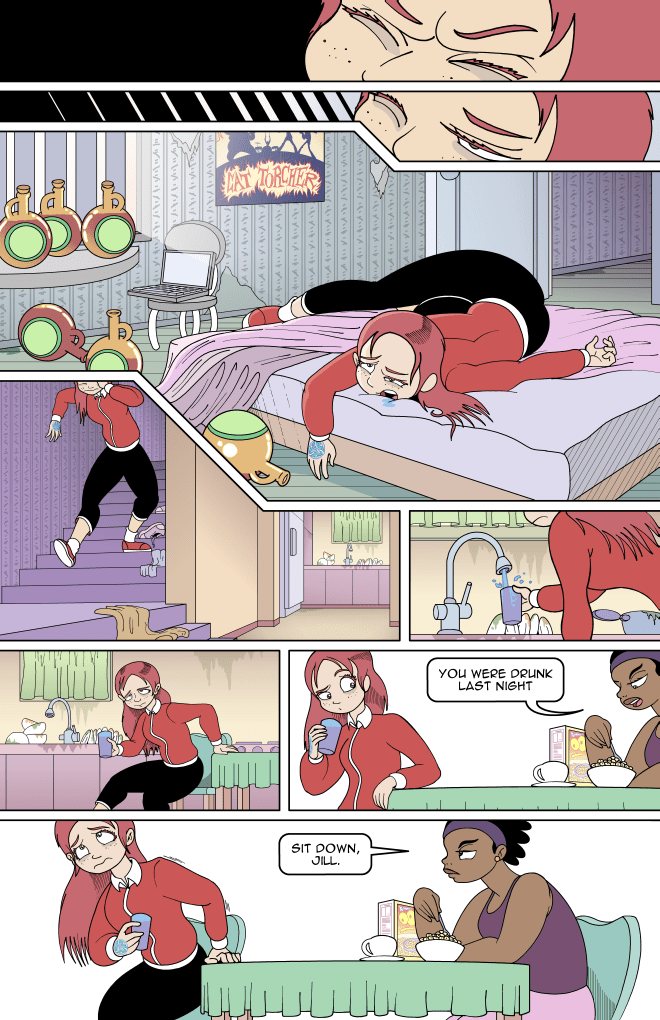 Ah yes, the great freakout of 2014. I felt that the story wasn’t working because I didn’t characterize Jill at all before starting it, and seeing how gruesome the dead rabbits were made me want to abandon the plan for Jill to accidentally burn Molly (even though the CAT TORCHER poster is still prominently displayed next to a bunch of the ale, so I was still holding on to it a little). I also didn’t feel like I’d properly set up Jill, so time for a soft reboot! Jill gets kicked back to Earth so we can learn more about her shitty life before the plot starts again!

Re-reading this, I’m surprised both at how unnecessary it was, but also at how it kind of worked despite being a panic move and a story I didn’t like the start of. “I got super wasted last night and became a magical girl” is an interesting premise, and it it recontextualizes the tattoo in a thematic way that’s pretty slick for how unplanned it is. I kind of lucked into it. It looks planned!

This is also an attempt to establish Tempest as a character. The smart, socially active one who had her shit together. Why is she friends with Jill? Is she friends with Jill, or just roomies? That’s a great question, but she ended up being kind of secondary. I tried to promote Tempest to main character in book 2, but then book 2 got cancelled, c’est la vie.

Here’s some Tempest Trivia, though: Her name comes from Cosby Show actress Tempestt Bledsoe, for no reason other than I thought “Tempest” was a cool name. Her never-mentioned-in-the-comic last name, Flowers, is from Ramona Flowers of Scott Pilgrim vs The World, again just because I thought it sounded nice. While we’re on a name kick, did you know Saffron and Sage is named after a sandwich shop called Bailey and Sage I used to live near? Sage the character was not part of the original plan for that story, but I liked the name enough that I put him in!

Jesus Christ, though. This page has eight panels on it, one of which is an establishing shot! I’m lucky Carlos didn’t fly to America to beat me up.

One thought on “Walk of Shame”