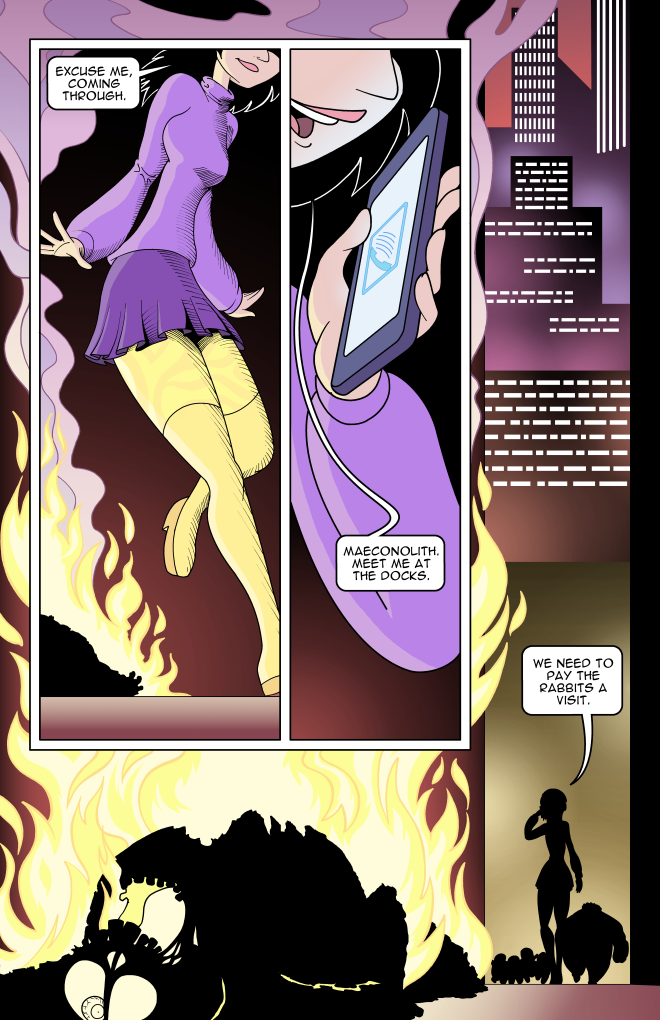 Burning through your minutes

And we’re done with all the scary gory shit, which will never be seen or referenced again! This comic is a comedy!

Speaking of horrific nightmares, what the fuck is Molly wearing? Yellow socks on yellow tights with yellow shoes? Ew. I’m pretty sure I decided on this outfit myself, which is probably why it’s a good idea that I have Sabu design outfits for my characters sometimes.

This page is honestly pretty worthless, except for the name-drop of Maeconolith who never ends up being explained and I’ll talk about him when he actually shows up.

People who’ve read ahead may wonder why Molly is going to the docks when it’s later revealed she has a teleportation stone. The answer is that to this very day I’m not entirely sure how you actually get from one layer of the tower to another. The individual layers are presented as if they’re universes, where there’s a sky above everyone instead of a roof. My backstory was that there were like these big Stargate things that connected all the layers to each other in peacetime, built by the horses (who were the “travel” people since you ride horses), and that during the….war?….the rabbits, dragons, and horses destroyed their gates to keep the rats out. This was actually alluded to in the lore posts under the original pages on the original site, but sadly those lore posts are all gone…

Wait, is the old site available on the Internet Archive? I don’t think I ever checked….

HOLY SHIT IT IS

Wow, that means I have all the old lore shit back! Thanks, Internet Archive! What deep lore did we have for this page?

“Blessed are the cursed, for they have seen beauty
Blessed is the man who sits in the seat of the damned
Whose delight is in the death of the world
Which passes in the day and in the night
For he shall he as the tree in the flames bearing fruit and nectar out of season
The godly are not so, the ungodly are the chaff that the storm drives away
For EACSTAIS knows the way of the righteous and the unrighteous”

Unknown, inscription on the base of pagan ruins in Tetrest

Ha ha, what the fuck, past me? Eacstais was another god from my DnD cosmology that I eventually dropped, the obligatory Cthulu god. What the fuck does this have to do with anything on this page, though?

The Lore Posts, which I’ve alluded to before, were bits of “lore”/worldbuilding under some pages, mostly written write as I was uploading the page. The whole idea was shamelessly ripped off from Kill Six Billion Demons, but in THAT comic the cosmology was directly related to the story whereas in mine it was mostly pointless piffle until eventually getting jokey.  Oh my god, look at this

For the Office of General Sergei Alliluyev,

Today has been a truly glorious victory. The rebels have been expelled from the square, and suffered great casualties attempting to retreat through the portal. Their cavalry has been slain almost to a horse. We estimated that the rabbits have lost forty percent of their forces. Though the dragons suffered minimal losses, we were able to expel them, and seize full control of the gate. With the possible exception of Emirpeta, all active gates to Monoligrad are now under our control.

Noteworthy confirmed enemy causalities, besides the obvious one, include Colm Ó Dálaigh of the rabbits. We believe the rabbits are thus leaderless, powerless, and effectively defeated.

For the glory of Erickson,

This is the post that went under page 2. This shit, which mentions the gates, Colm the previous Rabbit Champion, and the Dragon/Rabbit/Horse alliance, is under a page of Jill on a bed before any rabbits are introduced. See, I had plans!

It even mentions a gate to the rat kingdom from “Emirpeta” which is almost certainly the Cat Kingdom layer in the ocean. The “-peta” part is also almost certainly “Nepeta” which is the scientific name for Catnip but lets be real here and admit that I named a location in my first webcomic after a fucking Homestuck troll.

I literally only thought to check the internet archive as I’m writing this post and I’m all nostalgic and excited to learn what kind of bullshit I thought was cool in 2016 with all of you.

One thought on “Burning through your minutes”