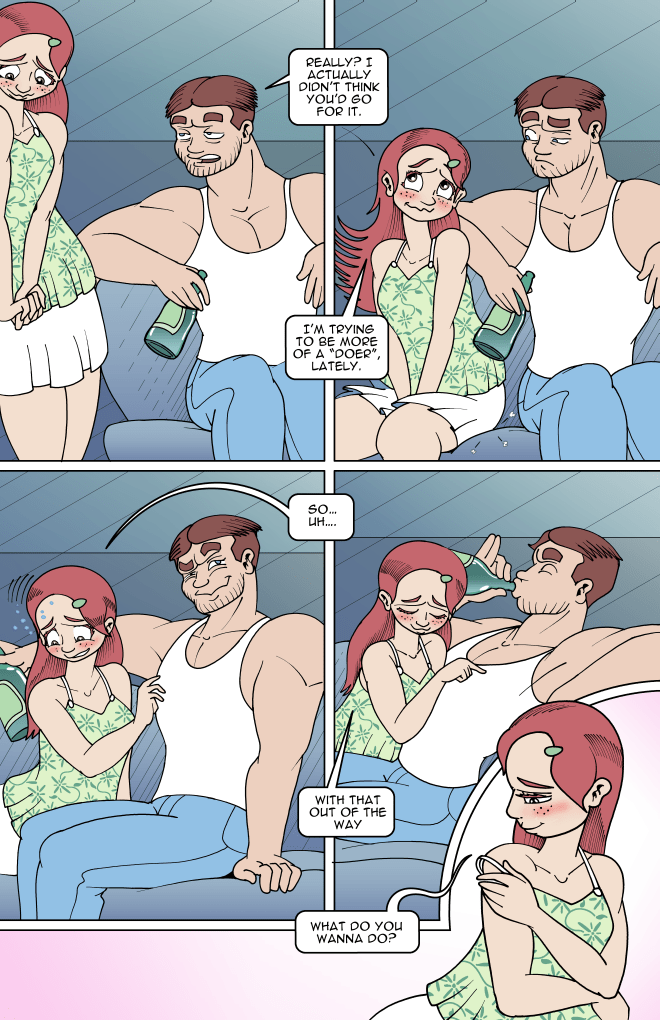 Fucking Riley, turning to the camera and winking when he realizes what’s about to happen. Also, and I didn’t even notice this myself last week, but he was manspreading the whole couch and making Jill awkwardly lean against the table last page, but once she’s amenable to his wants he makes some space for her.

This is a version 2 of the page, and I actually remember what changed about it: Jill’s face in the last panel originally looked a little weird and everyone complained.

This is a fairly straightforward page, so in lieu of commentary here’s the original scripts for pages 40 and 41, typos and all. Note the changes Carlos made on this page in particular. Comics are a collaborative medium!

Establishing shot of inside Riley’s apartment. Riley’s getting something out of the fridge. There’s a couch across from a TV, with a little wooden table in front. On the wall is a poster for Fight Club, and another one for Reservoir Dogs. Jill is in the middle of the living room, looking around like she’s never seen this place before. She’s a little nervous, and her hands are clasped in front of her.

Jill: So, I just thought, y’know, we could talk a bit. About things.

Riley is getting something out of the fridge, which is full of beer, water bottles, and soda. There’s no food in the fridge.

Riley walks over to Jill. He’s holding the beer he got out of of the fridge. Jill is glancing down at his hands and reaching out ever so slightly to take her beer, but he didn’t get her one. This is a really subtle little moment, so don’t call attention to it.

Riley: What kind of things?

Jill, denied of her expected beer, folds her hands in front of her again.

Jill: Hey, I actually brought some crazy good hard stuff, if you’re in the mood for drinking.

Riley lies on the coach, monopolizing it’s space. Jill sits on the edge of his table, brushing her hair out of her face.

Jill: I’ve, um, been thinking a lot lately. About stuff. And things.

Jill: Let’s do it. Let’s go to California.

Riley: Really? I actually didn’t think you’d go for it.

Jill sits on the couch next to Riley, now that there’s space free. She’s leaning at him

Jill leans a bit further, crawling on top of Riley, who surprisingly quick on the uptake for what Jill has in mind and is totally down for it. Jill’s taking the initiative here, but she’s kind of nervous nonetheless, brushing her hair back out of her face again. She’s pushing herself out of her comfort zone, and surpressing her doubts.

Jill is fully on top of Riley, who’s lying down on the couch. She’s, like, sitting on his chest.

Jill: With that out of the way

Riley’s POV of Jill, fidgeting with her shirt.

Jill: What do you wanna do?