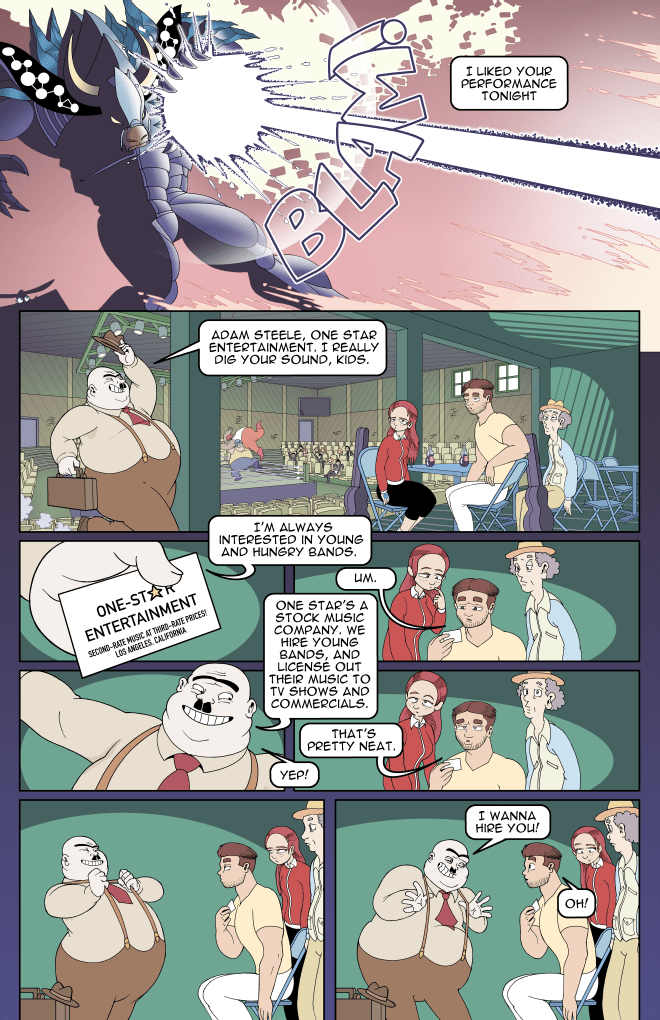 An offer he can’t understand

Adam Steele’s intro line here is the first of several references to the Broadway show “Rock of Ages” in relation with Riley. In the play, protagonist Drew is lured away from the bar and love and all that by a sleazy music producer from “Two Star Entertainment”. Adam Steele is even sleazier, his company is only one-star. Also he’s a fat bald Hitler, just so you know he’s bad news. Lot of subtle characterization in Legend of the Hare, really rewards you for paying attention to the little details. I do like his tiny fedora, though. I also like the punchline here, one of the first in the re-reads to actually get a laugh out of me. Jill and her band are just intensely unobservant people. Also, one actual bit of subtle characterization in the way that Jill and Starflower go from looking at Hitler to looking at Riley in the last panel. Despite his obvious unfitness to the role, he is the leader and Jill is turning to him to follow his lead. And I’d like to take credit for that subtle bit of storytelling, but my description for this panel was, in it’s entirety:

Adam is excited, Riley realizes what he’s getting at.

Man, I gave Carlos nothing to work with in these old LotH scripts, did I? Did I even write this comic? Even now, I’m no Alan Moore, but I try to at least have a paragraph, like in this script from an upcoming Saffron page: 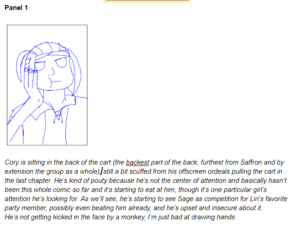 In Saffron and Sage I try to have at least a paragraph and maybe a more detailed explanation of the character’s inner thoughts (which is helpful for artists and something a writer should do anyway) and even this is honestly less than I should be doing, though I’m also trying to draw more and such. If there’s one thing I’ve learned writing for artists, is that you need to include more details. Even in this panel description, how is Cory sitting? Write that shit down, and while you’re at stop and think if “Cory is sitting” can be made to squeeze in some characterization. Does Cory have his knees up, erecting a barrier between him and the rest of the party, or does he have more open and welcoming body language that he hopes someone will notice and take him up on? It’s important in comics writing to know the answers to these questions, try and think visually how it’s all supposed to work, instead of making the artist basically write the entire comic for you and then being surprised it works different than you imagined. This is one of those things I know logically but I don’t do nearly enough, even now (I’ve decided that Cory has a knee up, literally blocking Liri and Sage, because he’s the cause of a lot of his own problems). But that’s a little peak backstage into how the writer-artist relationship works and why I pay Carlos and not the other way around. If you’re spending less than two hours writing a comics page, you’re not doing your job properly, and if you do ~2 hours on a page you’re still only doing about a quarter of the work.
But anyway, this comic. Riley’s character was mostly just “dickhead bro” but he was partially influenced by Stacee Jaxx, the main antagonist (maybe?) of Rock of Ages, which I’d recently seen and really liked. Ninety-odd pages from now, Riley will get a magical boy outfit based on the outfit Tom Cruise wears in the Rock of Ages movie (which I’ve never seen and is supposedly kind of bad?). But Stacee Jaxx really is a rock star, and Riley is just some muscleheaded dipshit who thinks he’s cool. In the aborted Legend of the Hare book 2, we would actually catch up with Riley and discover that he took the job with a new band, and it was some shitty tedious soul-crushing musical data-entry, and he blamed Jill for “forcing him to take it” by defeating him.
Tags