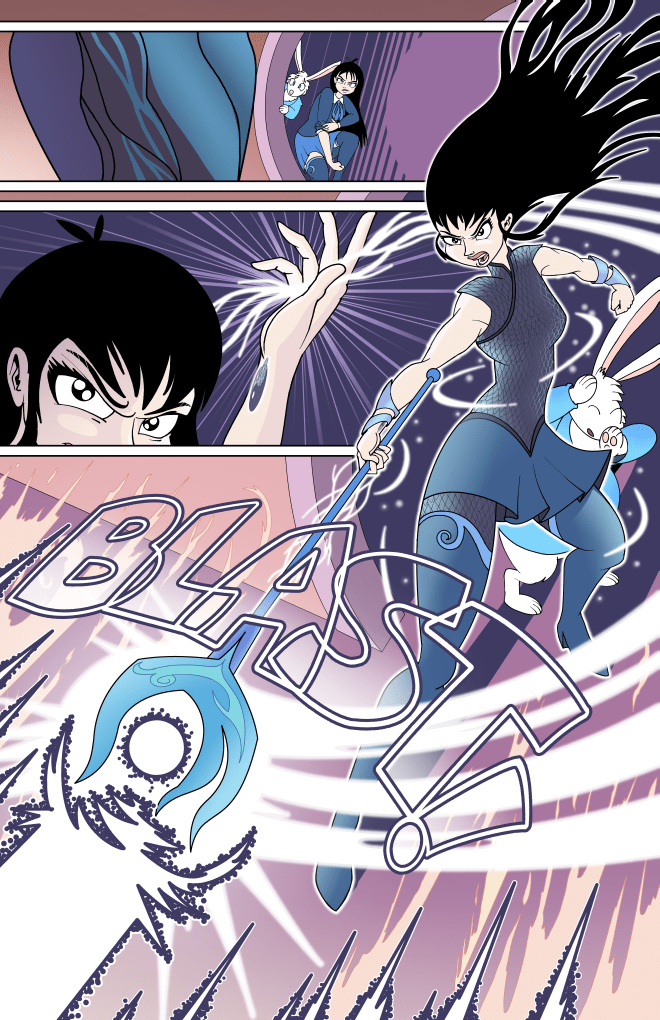 My mind is telling me Pew!

Jesus Christ, Amaya’s Champion symbol is a Yin-Yang ugh how lazy and cringe. I realize it’s cliche for writers to hate their old work, but god damn Legend of the Hare was bad sometimes. One of the things blocking me from posting the old stuff regularly is shame.

Not a lot else to talk about here (you can tell Drowemos was still paying Carlos instead of me because I spent a two consecutive pages on fancy splash panels), though, so why is Amaya’s symbol a Yin Yang? What’s her embarrassingly stupid mildly racist backstory that never gets so much as hinted at?

So, remember: Legend of the Hare was originally an official paid spinoff of an OEL called Blade Bunny, the heroes those characters kept getting mistaken for. In Blade Bunny, the main character has a sidekick named “Kyoto”. If Jill was the “real” Bunny, Amaya was supposed to be the “real” Kyoto.

So while Kyoto was – as the name hints at – a Japanese geisha stereotype, Amaya was a third-generation immigrant who grew up in Iowa to parents who had both also grown up in Iowa, and had no connection to or really interest in Japan. The Dragons who chose her were vaguely China-themed (as the rabbits are Irish-themed, the pigs are America-themed, the Rats are Russia-themed, etc), but had discovered anime and become huge disgusting weebs. So they they dragons but they were also neckbeard stereotypes obsessed with “power levels” and “waifus” and stuff and having massive dragon-sized body pillows. Amaya, rightly, found this embarrassing, and that’s why she prefers to hang out with the rabbits.

The other part of her backstory, which is never so much as hinted at so here’s as good a time to discuss it as any: A big twist was going to be that Jill was the latest in a long line of Rabbit champions, all of which had been brutally killed, and that the rabbits were keeping this secret from Jill (man, the rabbits are just total dickheads, aren’t they). Amaya had been dating the previous rabbit champion, Colm, and his recent presumed death had soured her on things a little (this is why she’s such a jerk to Jill). Since Jill had to work her way up the Zodiac, Colm would be revealed to be alive and well but on team evil, and Amaya would briefly join him and literally stab Jill in the back and throw her off the tower, so Jill would have to have fights against the Dragon and Rabbit champions too on her way back up. Amaya would turn good again, though.

I had all this figured out, by the way, but I still had no idea how this chapter was going to end. I was thinking way too much about chapter 20 and not enough about page 20, a problem I had for most of LotH.

Also, Amaya’s scale mail (like dragon scales), dragon theming, and spear probably wasn’t intended to be a reference to Final Fantasy’s dragoon, but there was joke potential there I missed.

(Amaya, being smarter than Jill, has her tattoo hidden under her clothes. Breaking the tattoo can un-magical-girl-you, so you wanna keep it hidden, although Molly never thinks to do that to Amaya when she has Amaya kidnapped so maybe it doesn’t because I’m a bad writer who doesn’t remember his own lore notes)