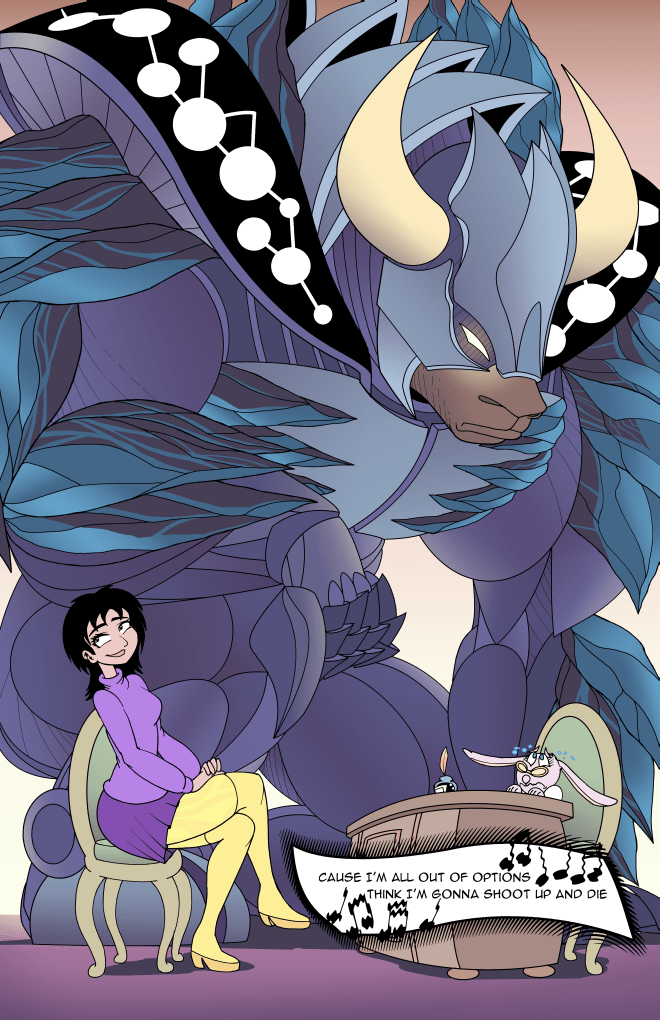 What a load of bull

Who the fuck even is this dude? It’s hinted Molly has some sway with him, but he’s notably absent during the climax.

Well, he’s “Maeconolith”, the Ox Champion. Man, 2014 me was really bad at naming things. I’m sure this is some kind of pretentious reference, but for the life of me I can’t remember it. If I were writing this today, I’d probably just name him Big Beef and have it be like a Metal Gear Solid joke that Molly plays him like a damn fiddle, but back in 2014 I was still extremely confused as to whether Legend of the Hare was supposed to be a comedy or not.

I presume he was going to be ice-themed based on his armor, but really I have no  idea otherwise, and also I don’t know how he’s fitting in Kaimay’s little rabbit office (clearly neither did poor Carlos, which is why this page just has a gradient background). Actually, were I writing this today, he wouldn’t fit, and he’d take up nearly every inch of space in the room and be kind of uncomfortable, and then when he got up the roof would get stuck on his head or something, which is lets me get a joke on this page while even further emphasizing how big and powerful this enemy Jill never ends up facing is going to be, to better build up anticipation for the fight that never happens.

All well, at least I got a page later of kids climbing him like a jungle gym, and that makes it worth it.