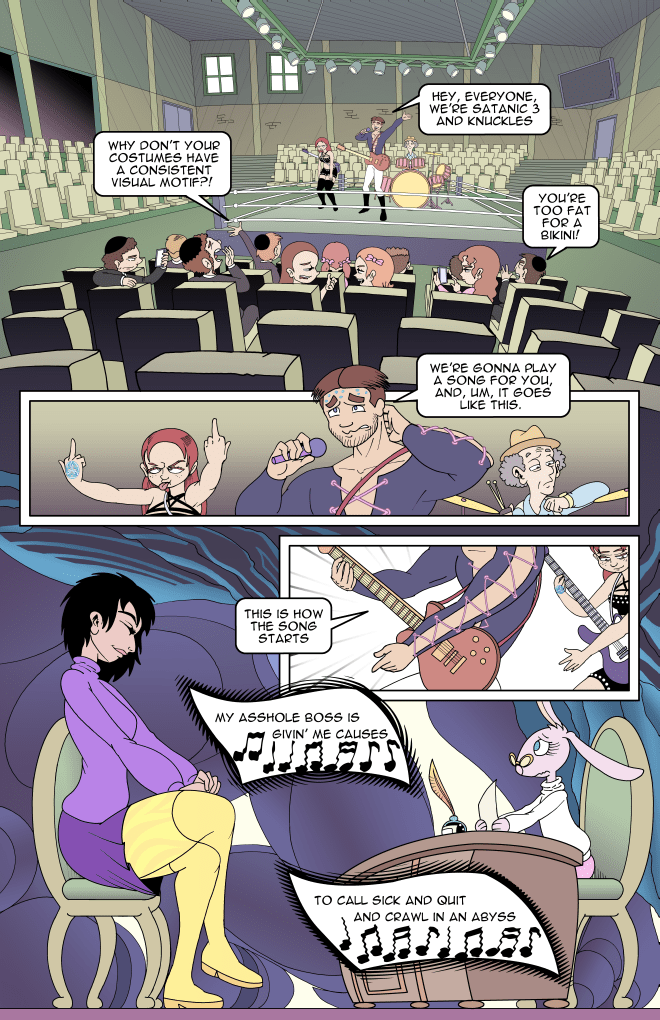 There’s not a whole lot to say about this page, if we’re being honest, but I really liked whole of the hecklers asking why their costumes don’t have a consistent visual motif. Heckling children making art critique is funny, IMO. Also good: Jill flipping off children. She should have done that more, honestly. In the aborted LotH remake, this scene (which would have taken place before the rabbits appeared), would have been a birthday party, and Riley would sing inappropriate-for-children songs. Jill would push back on this slightly, but Riley would convince her to rock the fuck out of some ten year olds and the band wouldn’t get paid. Obviously, none of that happened, but it would’ve been smoother scene better at establishing the “Jill is smitten with Riley even though he’s kind of a bad person” relationship.
“This is how the song starts” is veering a liiiiiiittle too close to “This is the beginning of the song” being the first line of a song from Scott Pilgrim vs the World. The song lyrics also don’t really relate to what’s going on in the rabbit world in any coherent metaphorical way. The song is bad, in every way. The lore post for this page, though, is one of the better ones, being a review of the band’s first (presumably self-published on Bandcamp) album, with the joke being the continued lack of thematic consistency:

“The Pit of Sad Despair Satanic 3 and Knuckles

01. We are a band and our name is Satanic 3
02. And Knuckles
03. The Pit of Sad Despair
04. Death Rides a Tiger Skull
05. Moonvalley Octopus Tangerine
06. Everyone you love will eventually die 🙁
07. Cuntfister Batallion 666
08. I love you and you and you and all of you
09. An eight year old girl’s mom has cancer
10. My vagina grew a dick and my dick grew a gun and now it’s overthrowing the capitalist patriarchy VII.
11. Sunflowers
[Bonus Track] – The flaming skull loves us all tragically.

The Pit of Sad Despair, the sophomore album from Somerville-based based rock/metal/folk fusion band “Satanic 3 and Knuckles” sucks. There’s no nice way to put it. Less of an album and more of a collection of mishmashed singles, The Pit of Sad Despair amazes in that every every single track is worse than the last one, regardless of what order you listen to them in. The album was apparently recorded on a webcam microphone, and entire instruments will fade in and out of songs at random intervals. Did anyone in the band even listen to this tripe before trying to sell it? If not, they’re smarter than us.

The Pit of Sad Despair isn’t even worth the time to read about, and the remainder of this review will simply be a translated except of The Iliad, in the hope that some value may be given to someone for this turd’s existance.

Zero trilbies out of a possible six point three trilbies.”

2 thoughts on “Shlock of Ages”