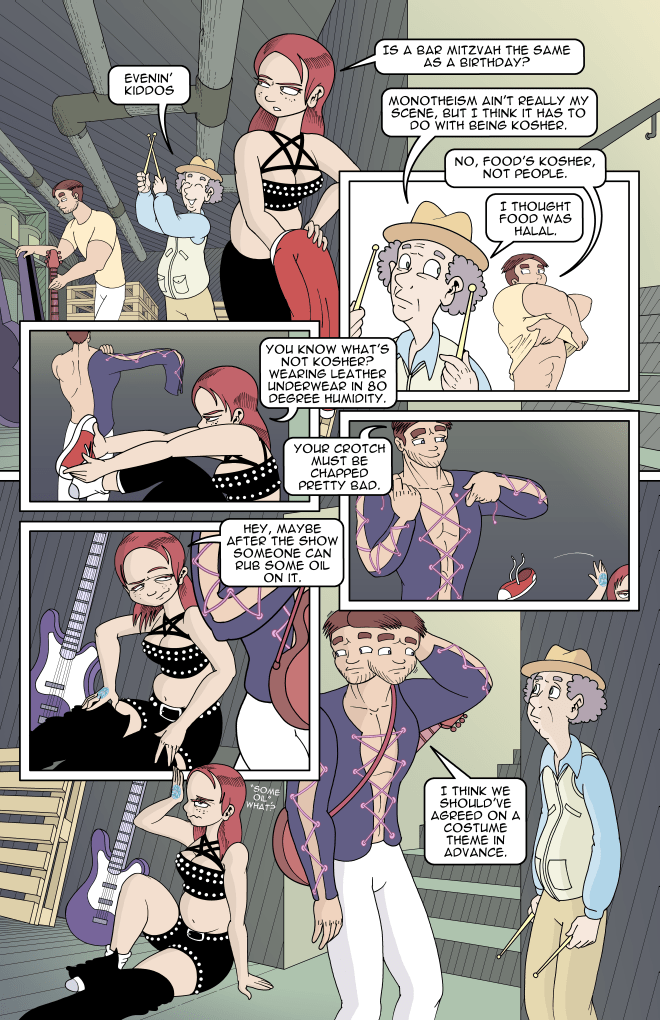 Jill’s bizarre attempt at flirting makes me cringe. Like, it’s supposed to be a terrible line, but it still comes off as…really weird. The panel description for panel 5 starts ” Jill tries to give Riley a lascivious look, which is slightly awkward since she’s also trying to take her pants off while sitting“. Is that a “lascivious”  look? It’s certainly slightly-awkward. I am, however, proud of Jill complaining about “80-degree humidity”, which is a naturalistic bit of dialogue I really like for some reason. One other naturalistic thing I never thought about literally just now is that Jill is wearing her rabbit-given outfit that she slept in over her costume, meaning that she drunk drunk, crashed in her clothes and slept in “80 degree humidity” weather in her air conditioner-less room, woke up, brushed her teeth and stuff (hopefully), took off her dirty clothes, put on a costume, and then put the dirty gross clothes back on instead of getting clean clothes out of the closet. That’s such a great in-character thing for her to have done and I wish I could say I’d done it on purpose. Jill, why are you like this? I wrote you and I still don’t know.

Jill’s costume here kind of looks generic death metal, but it’s specifically a reference to professional wrestler Paige, who wore similar gear. Paige was the beginning of a shift in WWE’s women division from “Supermodels who fill time in the ring while people go to the bathroom” to actual wrestlers, but would go on to get a career-ending concussion before that transition was complete. I was kind of into rasslin’ at the time, as is obvious from some of the later fights. I don’t think it’s actually leather, though. That’d be uncomfortable.

Riley’s outfit is based on a male figure skater, but not one in particular, I just found some reference images and said “something like this”. It’s kind of not in keeping with Riley’s douchebro personality as would later develop, but I suppose he has layers, like an onion. The most important thing about his outfit, though, is that it’s the same color as Jill’s guitar. This wasn’t something I’d written in the script, but seeing it in the final art inspired in me the idea than Riley got Jill to play the Bass so he could be lead guitar. That’s never mentioned in-comic, but that little bit of backstory helped Riley click for me as a character.

Starflower’s outfit is based on a picture of Bill Murray, but I just liked the outfit more than any particular Bill Murray-ism.