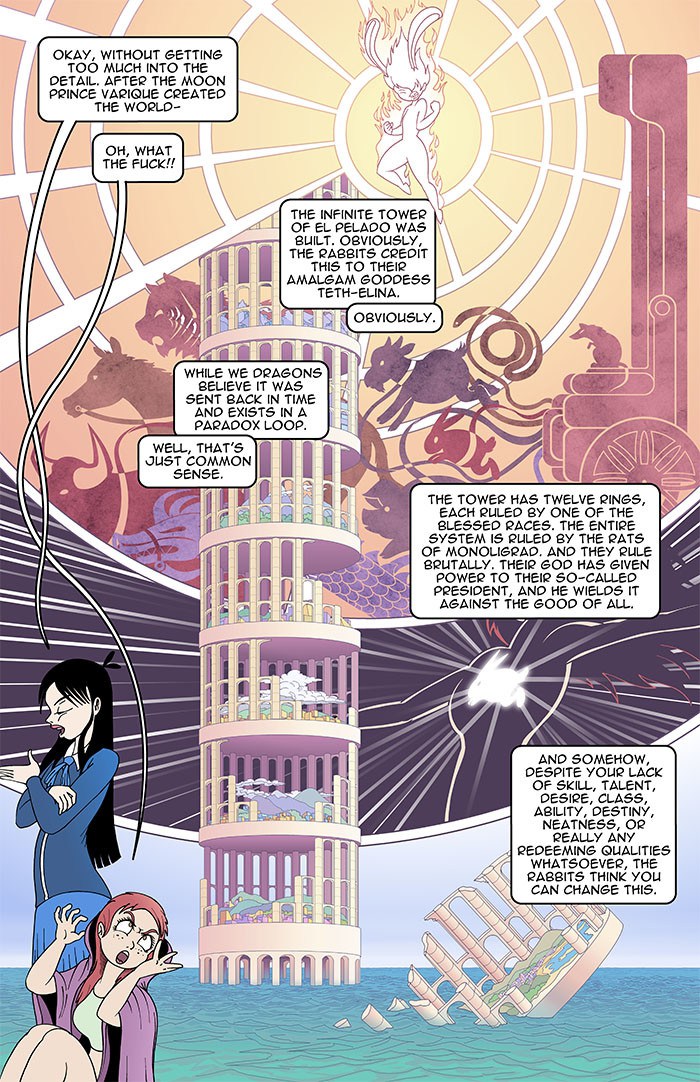 Oh man, this page. I hate this page so much, and have often ranted about it on my blog

This page has some of the nicest art in the whole comic, and the one disk of the tower that’s off in the ocean leads to immediate mystery and speculation.  Visually this page rules, but then you read it, and….

God this is such an infodump, and the only thing established here that actually matters – the tower – is also the one thing not in the text boxes. None of the exposition matters at all, even though it was all intended to.

On the other hand, this page does work as a joke about infodumps that has a bunch of text no one will read while still establishing the one plot point that matters in a way people will remember by having it be the cool visual, so maybe this page isn’t that bad in a Death of the Author way, but it wasn’t what I was going for.

Most of the god stuff actually predates LotH by many years, and it was something for a Dungeons and Dragons campaign setting that I was way too excited to finally get to a use for. If you’re curious:

The moon god had two daughters, Elina and Dara. Elina was was prettier, so he tosses Dara in a ditch somewhere and raised Elina to be his bride. Elina was not super-cool with this, as you would imagine, and as a child escaped from the tower with the help of her pet rabbit Tetheter, who had been given to her by Varique. Varique was enraged by this, and killed Tetheter. In her grief, Elina fused with Tetheter’s spirit to become the amalgam goddess Teth-Elina. Varique was all “Ew you have buck teeth now 0/10 would not bang”, but Teth-Elina was so pissed off about him she started powering up super-saiyan style to do battle with him. She powered up so hard that the yellow aura around her became the sun, and in ten million episodes when she’s done powering up she’ll bring about the end of all things and really give Varique what for.

The sister, Dara, became rebellious and learned to become the goddess of time, worshiped by the Dragons in Legend of the Hare (as Amaya hints at here) and Liri over in Saffron and Sage, which has the same cosmology because I never learned to kill my darlings. The rat’s god Amaya references, Kanivyes Mallory, was also part of that. His gimmick was that his domain was the dirtiest place on earth and you could summon his by making your immediate surroundings dirty enough to qualify, which is a neat enough gimmick I guess. Great little summoning ritual, honestly. “Eye of Newt, Whiz of Cheese, Witch’s Feet and Bed of Fleas”. There’s some good comedy potential of a god you summon by knocking over a beer can. Cracking open a cold one with the divine.

Aaaaanyway, of interesting things about LotH on this page

1. “Monoligrad” is the rat kingdom. Mono because it’s first, “-ligrad” because they’re like Soviets I guess.

2. Amaya says “We Dragons”,  which is I think the only in-comic reference to her being the Dragon Champion, but maybe there’s another one later I’m forgetting

3. Amaya refers to the “Blessed Races”. This never comes up again, but I was leaving the door open to have non-blessed races of animal people who didn’t get their own layer

4. The level of tower in the ocean is, yes, the Cat Kingdom. In the Chinese Zodiac myth, rat pushed cat into the river so he couldn’t make it to the Zodiac Meeting, so the Cat kingdom is in the water. Molly, the unknowing Cat Champion, would be destined to like save it or some shit I was very vague on that. It was less a planned plot point and more me intentionally putting that down so that I could pick it up later if I ever needed it.

I still didn’t know how this scene would end, by the way. Making it up as I went and super-over-planning all at the same time!

One thought on “Tower of Glower”