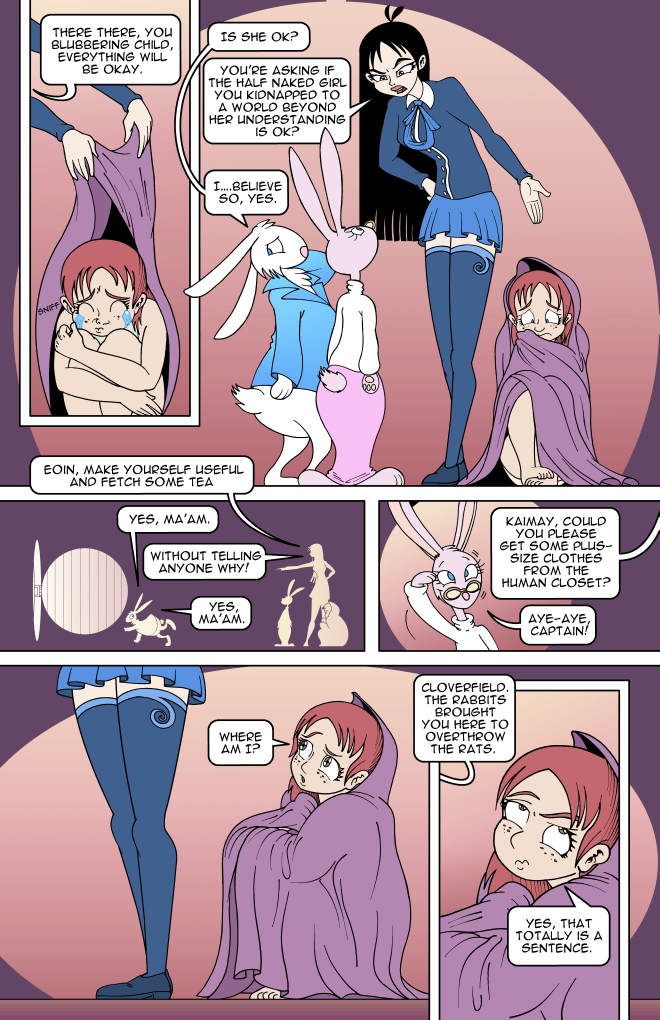 “Plus-sized clothes”? Jill is barely chubby, where’d that come from?

I had in mind a big twist for chapter 8 or so (as was often an issue in LotH, I had the big picture outline but none of the the page-by-page), where Jill was actually the latest in a long line of Rabbit Champions, who had all failed and died. Amaya had a bit of a thing for Colm, the previous Rabbit Champion, and resented Jill the replacement. Since Jill was working her up the Chinese Zodiac (Pig, Dog, Chicken, etc), when “Dragon” came up she and Amaya would work out their issues, and then “Rabbit” would be the next one up and it would be revealed that Colm was both alive and a traitor so that we could have a Rabbit vs Rabbit fight. At the time this page went up, I had all this figured out but didn’t know how this scene would end.

I can’t remember if the rabbits having a “human closet” is clever foreshadowing of the “There were other Rabbit Champions” twist or a plot hole. Let’s give past me some credit and say the former?

The rabbit kingdom is called “Cloverfield”, because rabbits are fourth in the Chinese Zodiac, and four-leaf-clovers are associated with Ireland. And field, because….rabbits….field. Checks out. All the Kingdom names followed this pattern in some way or another, I think. Cloverfield is also a monster movie that had came out a few years before, but I felt it was sufficiently forgotten by 2014 that I didn’t need to care about it. It has since gotten two sequels so whoops.

“There there, you blubbering child” is a pretty good opening line, though, and I like Jill’s disinterest in the ~*worldbuilding*~ even this early on, though I should have taken it as a warning sign that I felt the need to lampshade bad exposition.

One thought on “The Cloverfield Experiment”