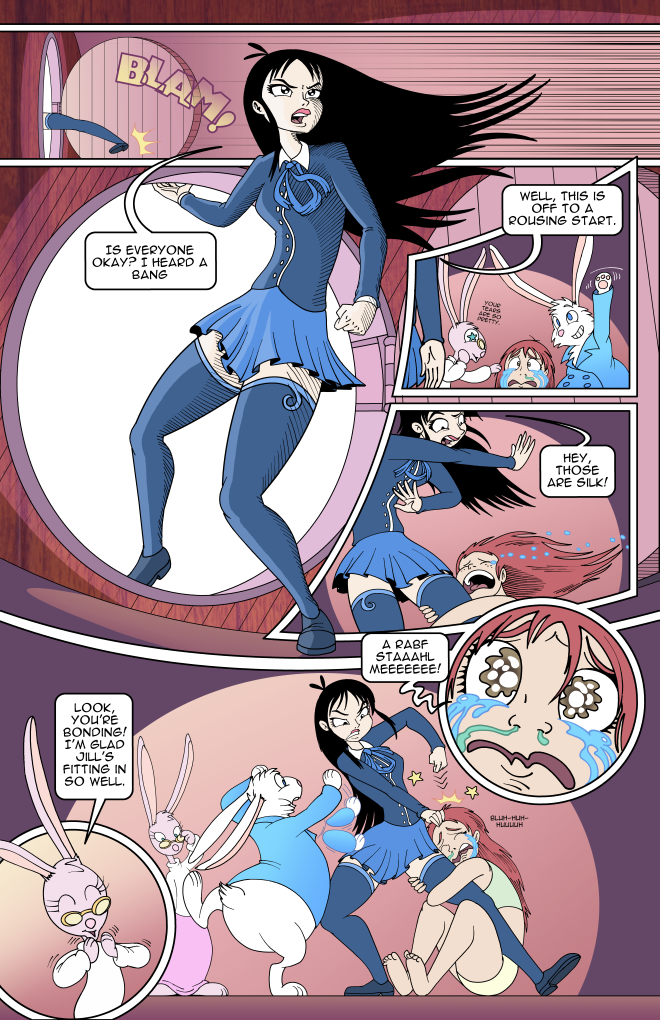 As you might expect from a Japanese character named “Kyoto”. Sort of as a result of this, Amaya’s never-actually-in-the-comic backstory is that she actually grew up in Iowa, doesn’t speak a word of Japanese, and doesn’t particularly care about what country her great-grandfather immigrated from., She was chosen as the Dragon Champion only to discover the Dragons were all irritating weirdos who wanted her to be more like in the animes, which is why she hung out with the rabbits. There really isn’t anything to do with that backstory, though, and it never ended up coming up. Probably for the best. Her ethnicity isn’t even alluded to in the comic and I don’t actually think Amaya is even a Japanese given name. Lousy baby name site. Lousy 2014 me not researching better.

Kaimay’s little “Your tears are so pretty” is great, though. Why did I stop writing her as a little creepy, there was a lot more to mine from that idea then I ended up using. Ah well.

What’s not great is everyone else’s dialogue. “Is everyone okay? I heard a bang. Well, this is off to a rousing start. Hey, those are silk!” “A Rabf staaaahl meeeee!”. Ugh. The “flow” of a conversation is hard to explain, especially since I’m absolutely not an expert in it, but this page might be a great example of how it goes wrong. The art’s great (especially how your eye is drawn to read Kaimay’s final line last even though it’s on the left!), but the panel breakdown in the script clearly sucks. Look, there’s a panel of Amaya entering kicking the door open, and then a panel of her entering through the door. You could’ve cut the first panel and just had and “Slam!” sound effect. And that frees up space for the second panel to be a better view of Jill’s breakdown, and I could have cut the weird inset panels which don’t really add anything. Maybe just have it be a two-panel page of Amaya entering and then a shot of the scene in the room. Back then I was very focused on trying to fit as much stuff on the page as I could, but I’ve gotten a little bit better about trusting Carlos and letting the art do the talking.