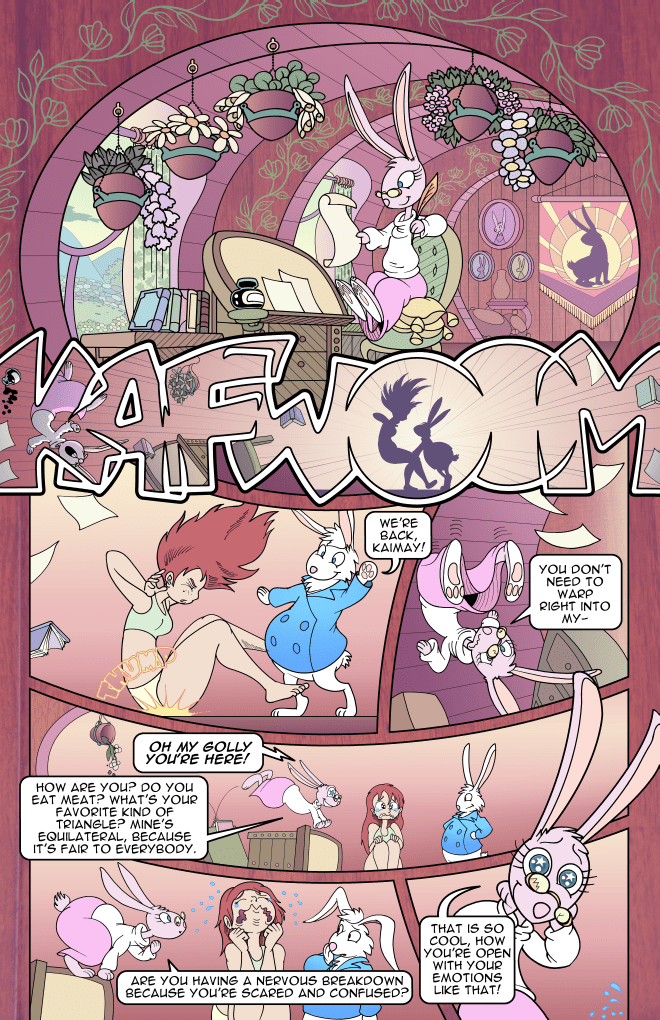 Let’s try this from another angle

This top panel is among my favorite pieces of art in all of Legend of the Hare. To this day, it’s the banner image for both my twitter and my tumblr. Look at it! It’s gorgeous! I knew Carlos was a good artist, but this was the first time I noticed his flair for backgrounds.

That banner of the rabbit in the sun in the background is the symbol of the rabbit god, Teth-Elina. I had this whole cosmology that I’d written up a few year prior to LotH that happened to include a rabbit god, so I tried to cram it into Legend of the Hare. The tl;dr on that idea was that the moon god was an abusive dick to his daughters, especially the sun goddess Elina. After he killed her pet rabbit Tetether, she fused with him to become a half-person half-rabbit, and began powering up Dragonball Z style to fight the moon at the end of the world. Much like Goku gets a yellow light around him when powering up, she does as well, and she’s so powerful that that light is what we call the sun.

So, “Kaimay”. I don’t know what the hell happened here. The idea was that the Rabbits were Irish, which is why Eoin is spelled that way, and I had the idea that the girl rabbit would be named “Caoimhe”, which is an Irish name pronounced Kiva or Kweeva, but Jill would see it written down and take a guess and Caoimhe would be such a doormat she went with it. This is a very complicated setup for not much of a joke, so I mostly dropped it but somehow Kaimay just became the character’s actual name for some reason, and I’ve been baffled as to why I did that ever since. In the aborted Legend of the Hare remake, Eoin and Kaimay were combined into a single rabbit named Aisling, but that never went anywhere.

Stupid names aside, Kaimay nerding out over a confused Jill having a mental breakdown is a pretty great intro to the character, as is her randomly volunteering that her favorite type of triangle is equilateral because it’s “fair to everybody”. Also great: Eoin’s teleport having some huge shockwave that sends Kaimay flying. There’s a lot to like about this page, even as early as it is, and I think it’s the first page of LotH that I really like.

2 thoughts on “Let’s try this from another angle”