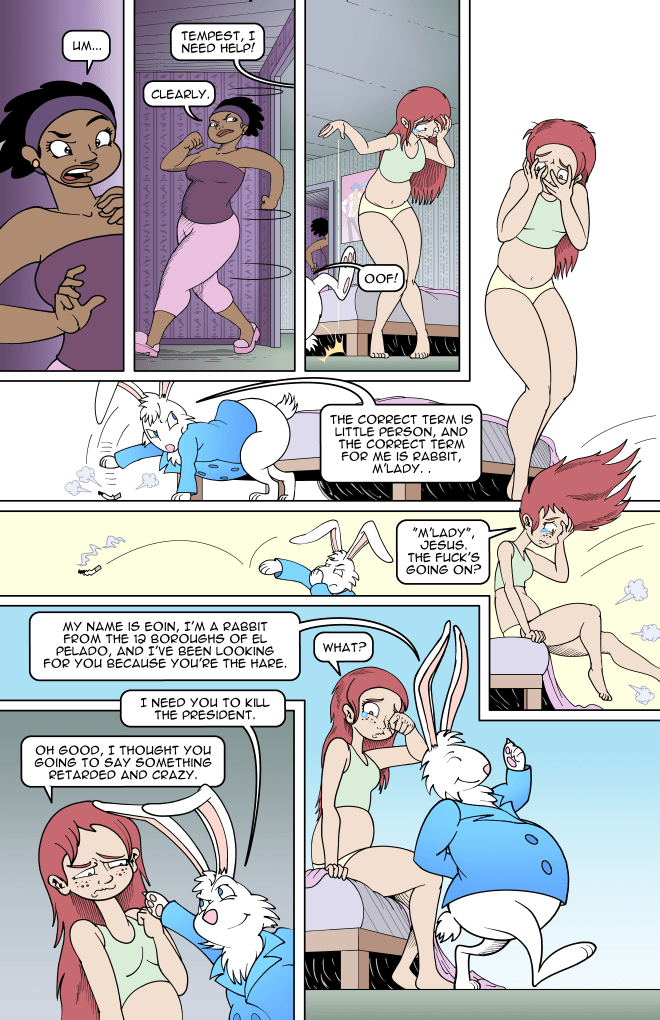 Your mission, should you choose to accept it

Huh, the context of this killing the president joke feels a little different now. Speaking of things that have aged badly, Jill’s casual slurs! I don’t think it’s wrong for a character in a story to be “problematic”, since stories need to have “problems”, but this character trait is kind of off-putting and never goes anywhere or adds anything to the story, and it’s part of why I lollygagged on posting this strip. It’s edge for edge’s sake, and it’s cringy, but mistakes are how we learn. I think this the last time Jill does this, and the last awkwardly un-PC bit until the Ku Klux Klanjas.

“My name is Eoin, I’m a rabbit from the 12 boroughs of El Pelado, and I’ve been looking for you because you’re the hare”. Man, there’s a lot to unpack here. I’d already decided on the setting being a tower with twelve layers, or rings, so I have no idea why Eoin refers to them as “boroughs” here. The rabbits were originally intended to be vaguely Mexican, and be volcano rabbits, who are native to the “Pelado” volcanoes according to Wikipedia. Eoin himself was originally named Teporingo in reference to this. But it turns out “El Pelado” is a bit of a slur in and of itself, so whoops.  I decided at some point to make them Irish instead, which mostly shows in Jill’s stepdancer-influenced champion outfit and the two important rabbits having Irish names. Well, they were both supposed to, but we’ll get to that when the other one shows up.

Eoin also believes Jill is “the Hare”, but it’s never explained what that is or why he believes it. This is because Legend of the Hare was originally a official spinoff of a webcomic – now a print comic – called Blade Bunny. 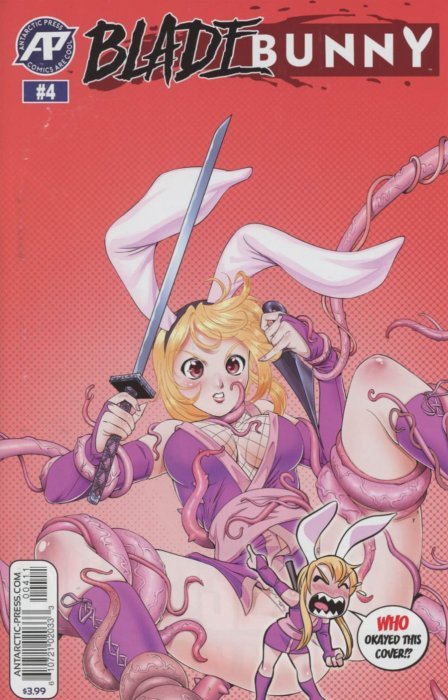 Which was a sexy OEL gag comic thing. I applied for a job as the writer of that series without having actually read it, and Eric “Drowemos” Kimball, the writer of that series, commissioned an artist for me and encouraged me to do what I wanted as a spin-off, for which he has my undying respect and loyalty and for which I actually have purchased the Blade Bunny book that’s still wrapped in my apartment somewhere. In Blade Bunny, it’s a running gag that protagonist Bunny is constantly getting mistaken for some legendary hero called the Hare, and LotH would be the story of the real Hare. I was always ready to spring a joke about how hares and rabbits are actually totally different animals and not two names for the same bunny, but I never got around to it.

I also never got around to explaining why Eoin thought Jill specifically was the hero. See, her name is “Jill Leverett”. A female hare is called a “jill”, and a young hare is called a “leveret”, so “Jill Leverett” is a young female hare. She must be the chosen one, it’s in her name! This was going to lead to some kind of joke when Jill found out how dumb the justification for her being chosen was, but once again I never got around to it because I was doing basically no planning.

One thought on “Your mission, should you choose to accept it”