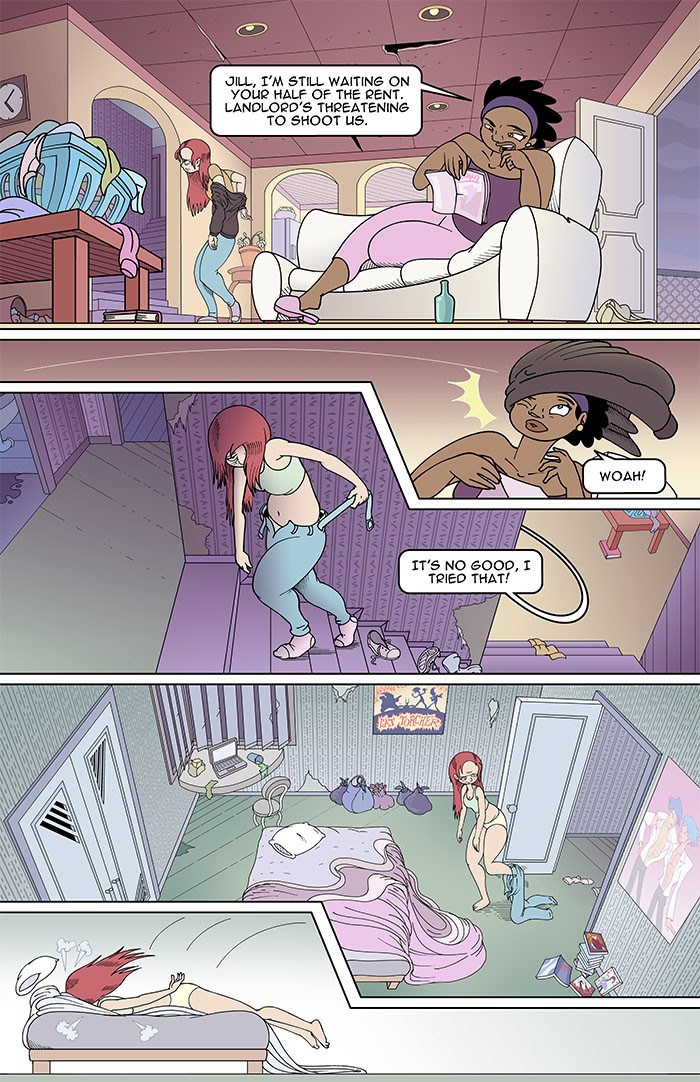 The second half of the “Jill returning home” motif, and the first instance of the “I’m waiting on your half of the [bill] the lender’s threatening to [weird punishment]” running gag. More subtly, the beginning of Jill’s hamper of undone laundry, which gets bigger ever time we return to this location until Jill overcomes her problems and then the next time we see it the laundry’s done. I was proud of that.

It’s only mentioned once in passing like 60 pages from now, but Legend of the Hare actually takes place in Somerville, Massachusetts. Two people being able to afford to share a house in Somerville on blue collar wages was absurd even back in 2014, the neighborhood had been gentrifying for years, but I had outdated memories of “slummerville”. I lived in Somerville myself for a few months, sharing a 2-bed 1-bath with another dude, two women, two cats, and a fairly large dog. I lived in a converted living room, and poor Colin slept in an office. Good times.

Tempest was originally meant to be a much more important character, and I had a vague idea that she’d be Jill’s opposite in every way, being a LGBT activist and generally a smarter more serious character for Jill to contrast against, but Tempest never really got that much screen time. Fixing this was one of the goals of volume 2 before that went on indefinite hiatus. Maybe one day, Tempest!

The band poster in Jill’s room says “Cat Torcher”, foreshadowing how Molly was secretly the cat hero and Jill accidentally set her on fire, two plots points that didn’t actually happen because the comic veered off the plan fairly quickly. I have no idea who the anime boys are supposed to be.

I only just noticed this, but Jill’s best is in the least space-efficient location possible, but she can’t put it up against the wall because it’s block the door, block her closest, or clip into the desk thing built into the wall. This room layout kind of sucks!