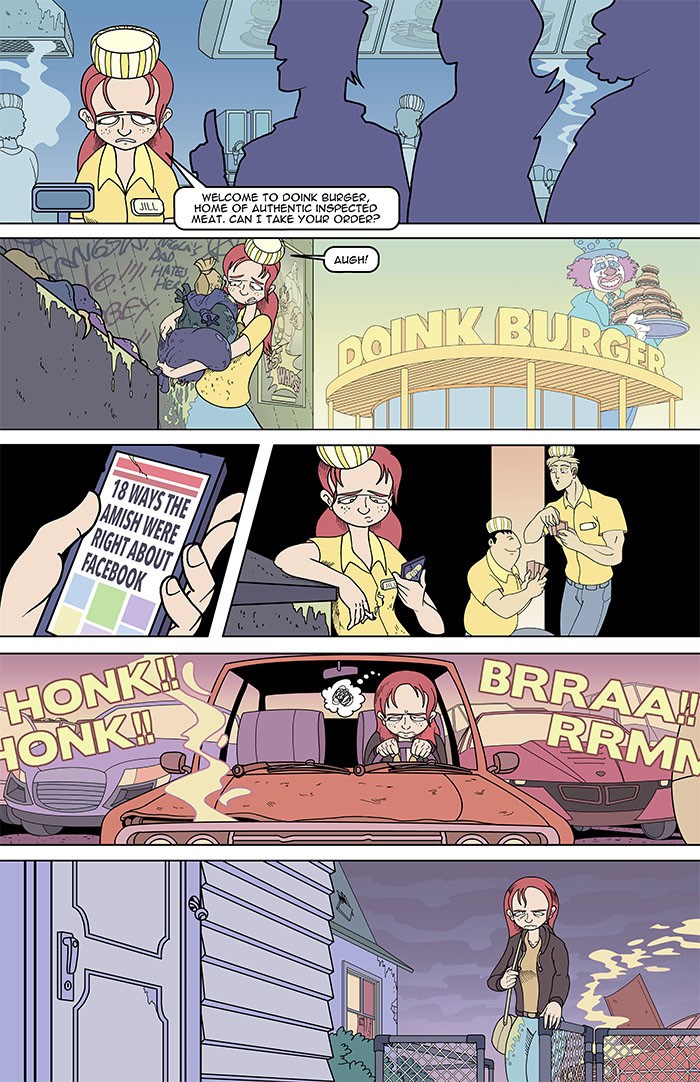 LotH was originally launched with three pages, so you were meant to skim through this and get to page three and OH MY GOD A TALKING RABBIT, which would be the big “hook” to get you to keep reading. Ironically, even though pages one and two were just there to get to page three, they contained a sequence of sad Jill driving home and getting accosted about unpaid bills that would be a way bigger part of the comic because it became a repeating motif

“Doink Burger” is a reference to pro wrestler Doink The Clown. Doink the Clown, brah? Making kids cry, brah? Yep. I was big into pro rasslin’ at the time. Early LotH had “lore posts” underneath all the pages, an idea I shamelessly stole from Kill Six BIllion Demons, and the ones about how shitty Doink Burger was were the most popular, so what was intended to become a one-off gag became a recurring location.

Speaking of the wrestles, the graffiti on the wall says “Nicola’s Dad Hates Her”, a reference to my very first and quickly-aborted attempt of a webcomic, Falls Count Anywhere. Nicola was the protagonist of that comic, and her dad was absent for reasons I never explained or came up with because I gave up on that series six pages in, due to an overabundance of ~*edgy*~ jokes, an issue LotH would also have.

This is actually the second version of this page, the original version was much more neon, and you can see it on Patreon over here

In the likely-never-to-be-made LotH reboot I wrote a script for, the first page looked like this:

The first page is a lovely album cover scene. It’s very BLUE, which is a color that’s going to represent Jill’s dreams and aspirations, which will culminate in her blue magical girl outfit. JILL LEVERETT is sitting on a dock over the water, on a beautiful day with not a cloud in the sky. Jill’s wearing a blue one-piece bathing suit, eyes closed and enjoying the moment. Next to Jill is a purple drink in a martini glass and a radio playing music.

In the bottom right of the page is a yellow narration box slammed onto the scene, literally cracking it a little.

Someone shit in the urinal again