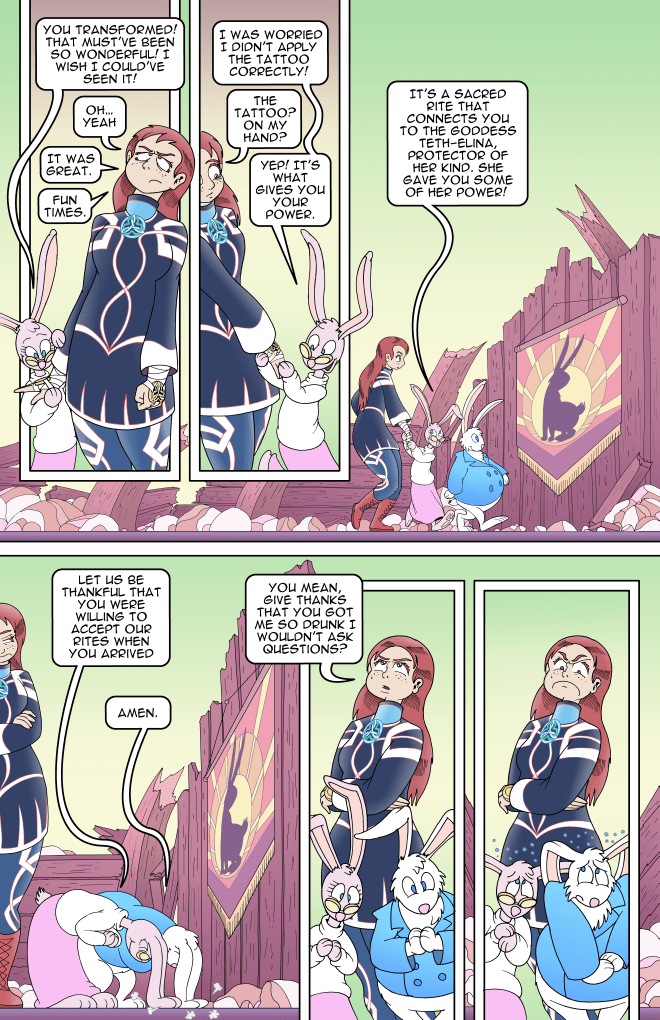 Our bun, the sun

Jill’s got a point here. It was insanely unethical of the bunnies to draft Jill into this when she was too drunk to object. Sure, they were desperate and Jill eventually decided to do it of her own free will anyway, but I kind of wish we dwelled on that just a little bit more.

Of course, Jill’s pretty quick to forgive, as we’ll see later with Riley.

Less importantly, this is the first, and possibly last, reference to Teth-Elina in the comic. I had this whole pointless cosmology worked out, which was showing up in the lore posts but no one liked those lore posts and the comic got sillier so it never came up.

The basic gist is that the moon king had twin daughters, Elina and Dara. Dara was uggo so he threw her out to die, but she got rescued by her future self and she became a juvenile delinquent punk goddess of time (you might recognize her as the goddess Liri’s all about in Saffron and Sage). Elina got locked up in a tower with her pet rabbit Tetether, who tried to help her escape, failed, and was killed for his trouble. Elina, in grief, merged with the rabbit to become Teth-Elina, and then started powering up Dragon Ball Z style. She powered up so hard that the glowy super saiyan aura around her became the sun, and she chases the moon around to this day. It’s prophesied that after 10,000 episodes she’ll finally catch him and the battle will bring about the end of the world. I really like that cosmology, which is why it made it over to Saffron and Sage, but I never found a way to do more than mention it in passing because honestly it’s just not that important to anything.