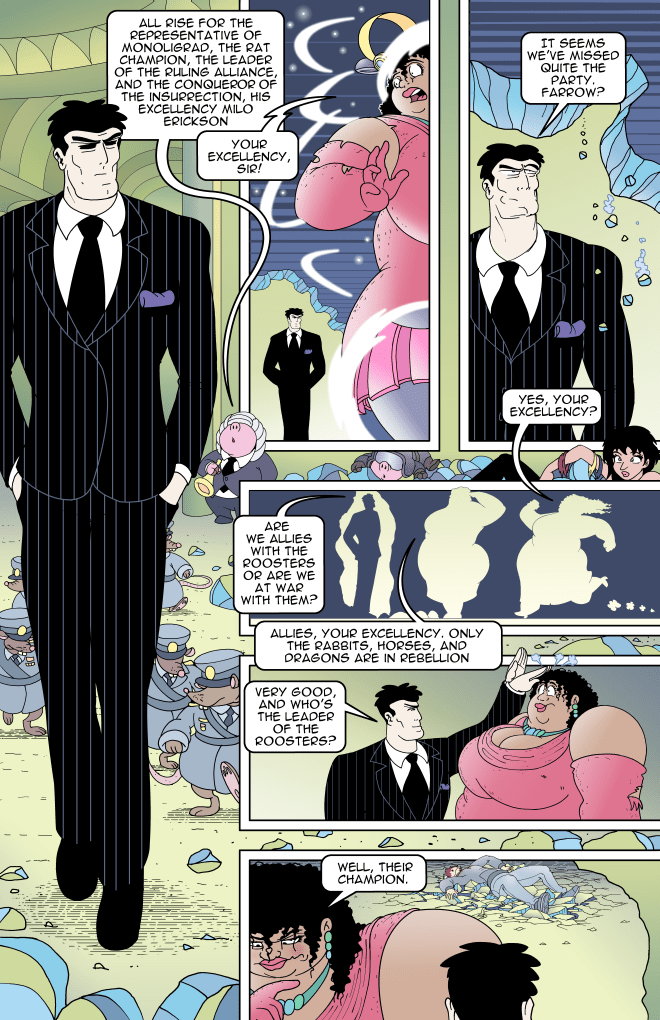 Sometimes I lie awake at night thinking about how the movie “The Muppets Most Wanted” was originally called something else and the studio made them change it at the last minute so when you watch The Muppets Take Manhattan it opens with a musical number informing you that you’re watching a movie called “The Muppets…Again!”. It vexes me.

Anyway, Milo Erickson. The Big Bad Evil Guy of the entire setting who’s never mentioned again after this scene. He’s the Rat Champion, and his name is an amalgam of Milo Yianopolous and Erick Erickson, a pair of alt-right douchebags who were prominent at the time. This comic originally came out in January of 2016, and for some reason I was getting very agitated about American politics at the time. Points for being ahead of the curve, I guess. There isn’t a lot of overtly political stuff in this comic (Peggy is rather Trumplike, but that’s because she’s inspired by Biff from Back to the Future II, who was based off Trump. Milo being the Rat champion and the rats being Russia-themed was also decided pre-Trump), but I was certainly thinking about it a lot. Still am. Do you think America will exist as even a semi-functioning democracy in five years?

Anyway, speaking of political stuff, Milo just kind of assumes the black woman is at fault in the fight even though Helen was the one who started it. What a jerk. I bet this is the start of a deep and thoughtful treatise on race in right-wing hierarchies! (Milo is never seen or mentioned again after this)