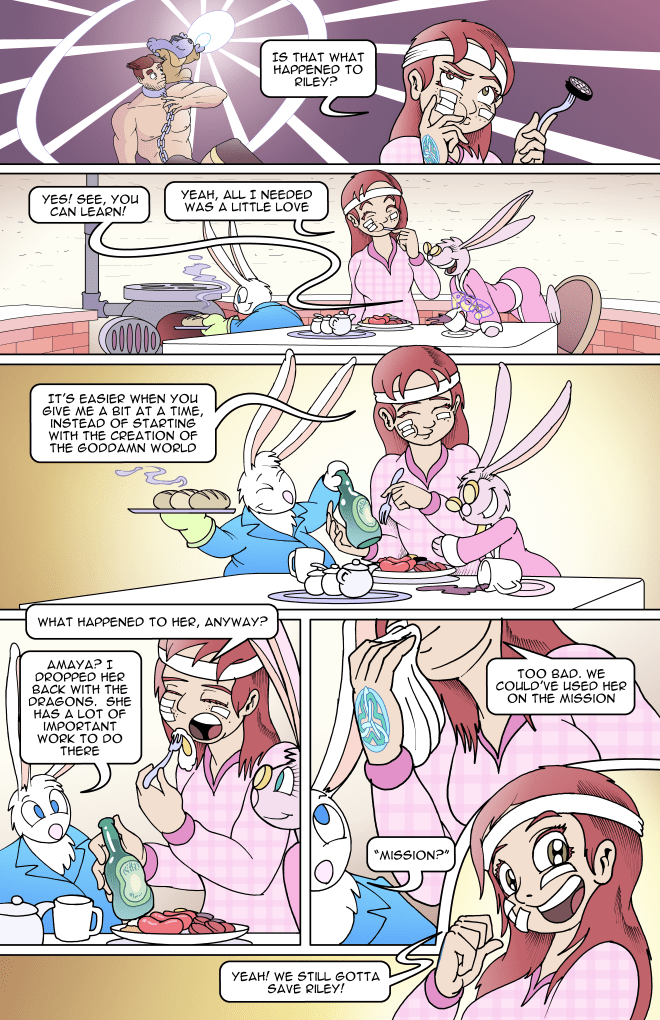 The rabbits, being Ireland-themed, are giving Jill an Irish Breakfast….which apparently includes a bottle of beer? Is that beer?

This page is some exposition, but this is a jarring transition from the last page, huh? I’ve never been comfortable with scene transitions. I think I’m better now at having some kind of connection nowadays, though it’s still an aspect of writing comics I struggle with a lot.

Everyone’s cute on this page, even as Jill makes a terrible decision. This is really the first time Jill has evinced a real goal, and wow did that make the comic so much easier to write. For the first half of LotH, I had to drag the protagonist kicking and screaming into the plot, but it’s smooth sailing from here on out, which is why Saffron and Sage has “I need to rescue my boyfriend” established as a motivation from page 1.

Pardon the tangent, but I feel like, if you want to have a character in a story, they really need to have a motivation (“Peter wants to get laid”) and a thing stopping them from achieving it (“Peter is an awkward and kind of creepy nerd”). Anything less that that isn’t a character at all, it’s just a collection of semi-random quirks with no engine, but if you got those things down, you can follow the two-dimensional stereotype in your head to generate new ideas (“Peter’s in a Warhammer 40k club”), new plot beats (“A cute girl joins the Warhammer clubs”), eventually break from the stereotypes (“Peter is completely normal to the cute new girl instead of being an awkward creep”), and then come up with an explanation for the break from what’s expected that hopefully makes your character a bit more interesting than a carboard cutout (“Peter is comfortable around the new girl because they’re twue wuv”/”Peter doesn’t see her as a romantic option and once they start to form a connection his bad traits come back with a vengeance”/”Someone else in his group was creepy first and it made Peter start to reflect on his own actions”/”Peter is so monomaniacally obsessed with winning a Warhammer tournament that he’s willing and able to suppress his creepy horniness so she’ll join his team”/etc etc etc).

All the characters in Saffron and Sage I try to give them really clear motivations. Saffron wants to rescue Faunus (which means advancing the plot), Cory wants to impress people (especially Liri), Liri wants to have a fun vacation, and Sage wants…um….well Sage wants to protect Saffron mostly. His motivations aren’t as strong.

Aaaaaaaanyway, that’s all a longwinded way of saying that once Jill decided to rescue Riley, I no longer had to keep coming up with excuses to involve her in the plot. So from that perspective it’s a great idea, Jill!